The Company’s fiscal 2016 year end independent reserves report (the “Report”) has been issued following an independent evaluation of the Company’s producing oil & gas properties in the Taranaki Basin of New Zealand by Sproule International Limited (“Sproule”) of Calgary, Alberta effective March 31, 2016. The Company’s reserves were evaluated by Sproule in compliance with National Instrument 51-101 – Standards for Disclosure of Oil & Gas Activities (“NI51-101”) and in accordance with the Canadian Oil and Gas Evaluation (“COGE”) Handbook. Readers are referred to the Company’s Form 51-101F1 Statement of Reserves Data and Other Oil & Gas Information for the year ended March 31, 2016, which can be accessed electronically from the SEDAR website at www.sedar.com, for additional information. 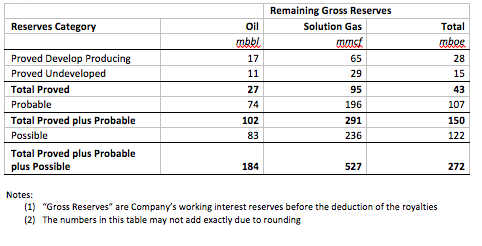 Said Company President and CEO, David Sidoo, “This past year was a difficult time for the petroleum industry and our operating results do reflect the much lower commodity prices we received during fiscal 2016. Our production volumes were also down due to wells being offline for repairs and maintenance and initial planning for a water flood capital program scheduled for fiscal 2017 at our 30% owned PEP 54877. Engineering and other studies are well underway by operator TAG Oil Ltd. We should see increased production volumes on completion of the water flood. Additional drilling at PEP 54877 is also anticipated late in fiscal 2017. In Romania the Company also has a 15% carried interest in four exploration concessions in the Pannonian Basin of western Romania with Naftna Industrija Srbije (“NIS”). An initial drill program is currently expected to commence in Q 4 2016.”

East West Petroleum (www.eastwestpetroleum.ca) is a TSX Venture Exchange listed company established in 2010 to invest in international oil & gas opportunities. East West has built a diverse portfolio of attractive exploration assets covering a gross area of over one million acres. The Company has its primary focus on two key areas: New Zealand, where it has established production and cash flow and is evaluating a low risk exploration play, and Romania where it is fully carried on an upcoming high impact 12 well exploration program. In New Zealand, East West holds an interest in three exploration permits near to existing commercial production in the Taranaki Basin, operated by TAG Oil Ltd. (TSX: TAO). The Company also has interests in four exploration concessions covering 1,000,000 acres in the prolific Pannonian Basin of western Romania with Naftna Industrija Srbije (“NIS”).

BOEs may be misleading, particularly if used in isolation. A BOE conversion ratio of 6 mcf: 1bbl is based on an energy equivalency conversion method primarily applicable at the burner tip and does not represent a value equivalency at the wellhead.